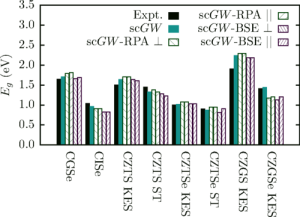 We pubblised a new paper1 on the optical properties of Cu-chalcogenide photovoltaic absorbers. In this manuscript we  calculate the optical response of the less studied, but promising, Cu2ZnGe(S,Se)4 compounds, opening the way to predictive calculations of still unknown materials by means of self-consistent GW plus Bethe-Salpeter equations.
Moreover in this paper we solved the problem of the dipoles calculation starting from self-consistent GW or in general from any non-local self-energy/functional. We used the dipoles definition of Blount2
and finite difference approach to define dipoles without calculate any commutator with the non-local part of the Hamiltonian.
References: