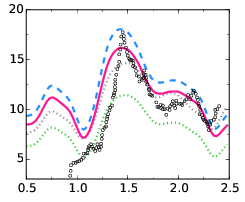 We present a new paper on Density Functional Polarization Theory (DFPT). This theory is an extension of Time-Dependent-DFT where the exchange correlation functional depends not only from the density but also from the polarization P. Thanks to this explicit dependence on P it is possible  solve different problems of TD-DFT in periodic systems with a simple and fast functional without introducing divergences in the theory.  Different ways to derive parameters that enter in the functional are presented in the paper and the corresponding functionals are tested again  linear and non-linear response of bulk semi-conductors.